This is why Shinjuku Ni-Chome might disappear one day

Garbage and noises… There are so many problems at Shinjuku Ni-Chome.The street festival, “The 16th Tokyo Rainbow Festival” on the street of Shinjuku Ni-Chome in the middle of August was such a success. The president of the Shinjuku Ni-Chome Promotional Committee, toshi, said something very important at the end of the festival, in front of all the people who gathered that day.

“Our Committee is worrying about what has become the area Ni-Chome now. There are serious garbage problems here. Particularly on weekend, people are complaining about noises and trash left on the street. I feel that Ni-Chome, as we know today, might disappear one day, if things don’t change. Even the festival might disappear too. The Committee is thinking about starting cleaning activities around the Shinjuku Park on weekend for the future of Ni-Chome. Shinjuku Ni-Chome is one of the famous gay towns in the world. In order to make this town a great town, everyone can do a small thing to improve the town. I hope everyone who loves Shinjuku Ni-Chome would participate it.”

Ni-Chome might disappear?! I have interviewed people who work and people who hang out at Shinjuku Ni-Chome to know the truth.

Shinjuku Ni-Chome is known for many LGBT (Lesbian, Gay, Bisexual and Transgender) bars, clubs, pubs and shops. There are several hundreds of LGBT related shops in this area. It’s make this area quite unique in the world. Therefore many people consider Ni-Chome as a night town, where people enjoy going out at night. Yet there are many people who live in Shinjuku Ni-Chome from long time ago. In a day light, it’s actually an average town with shops, companies and schools. Although the Shinjuku Ni-Chome Promotional Committee is created by LGBT pubs and bars, there is a Ni-Chome neighbourhood association, which exist long before the Committee, created by the habitants of Ni-Chome. They have noticed increasing numbers of LGBT shops in the area.
As the number of bars and pubs increased, the amount of garbage also increased along. As a result, the garbage needed to be collected every morning from Monday to Saturday in Shinjuku Ni-Chome. The city also organized the cleaning of the Shinjuku park, which is situated in Ni-Chome.

The “Shinjuku park,” situated right in front of the main stage of Tokyo Rainbow Festival, has been closed for several years. It has been renovated and re-opened on April this year. This is the only park in Ni-Chome, where many people use day and night. During the day, the habitants of the neighbourhood play with their children. At night, it is filled with people hanging out at Ni-Chome. There are particularly more people hanging out, drinking and making noises at the park on Saturday and on night before holidays. I am sure that those people aren’t aware that there are people actually living in Ni-Chome. Therefore people make noises until late at night on weekend, ignoring the fact that there are many apartments right next to the park. On top of that, they leave trash after eating and drinking in the park as well.
On Sunday and holidays, no one is collecting garbage or cleaning of the park. Therefore, the park is filled with trash left on the day before Sunday or holidays. In addition to problem with the garbage left by the bars and restaurants (usually people shouldn’t take out their trash on the day there is not garbage collection), the trash in the park becomes a big problem.

I checked how the Shinjuku park look like on Sunday morning 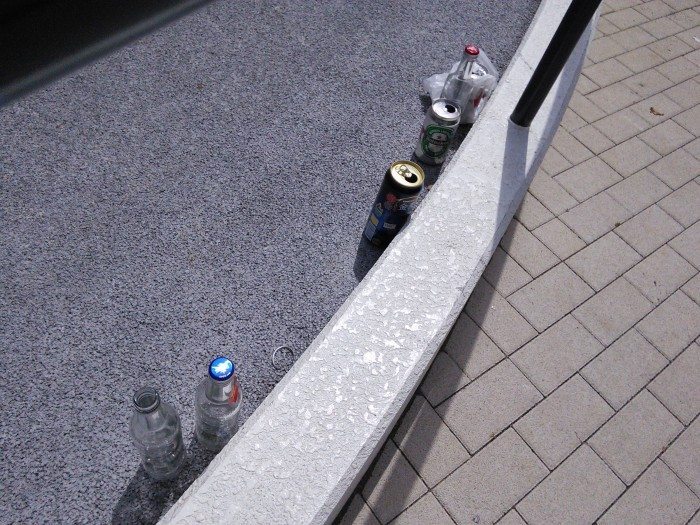 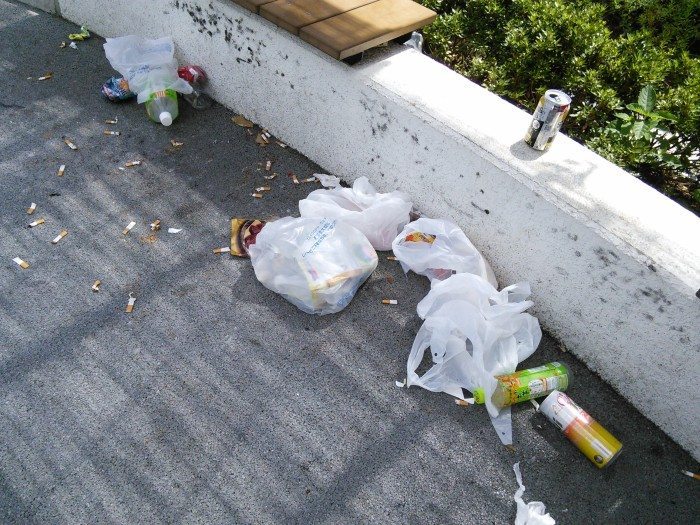 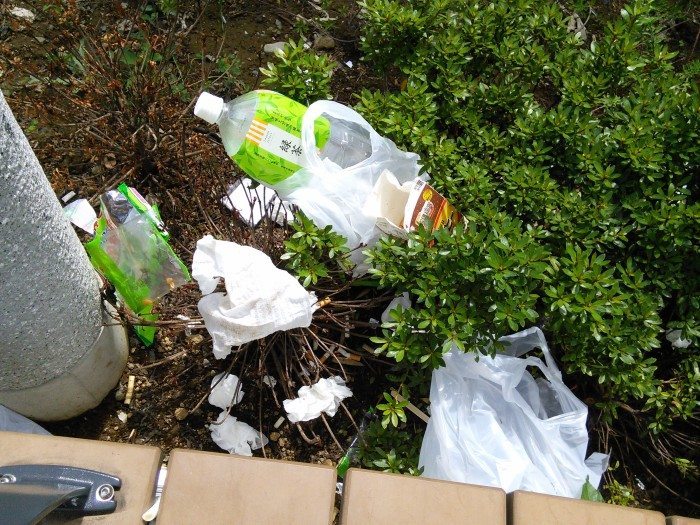 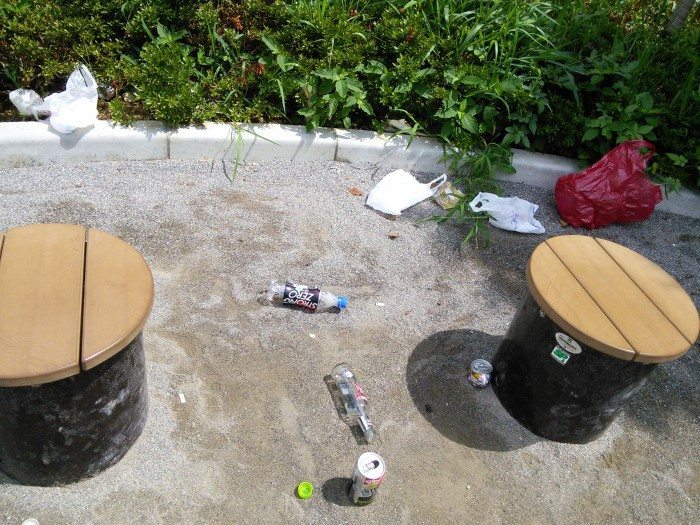 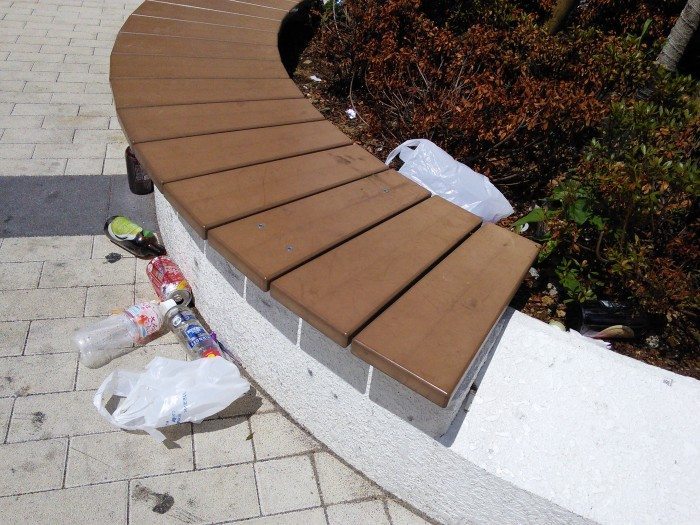 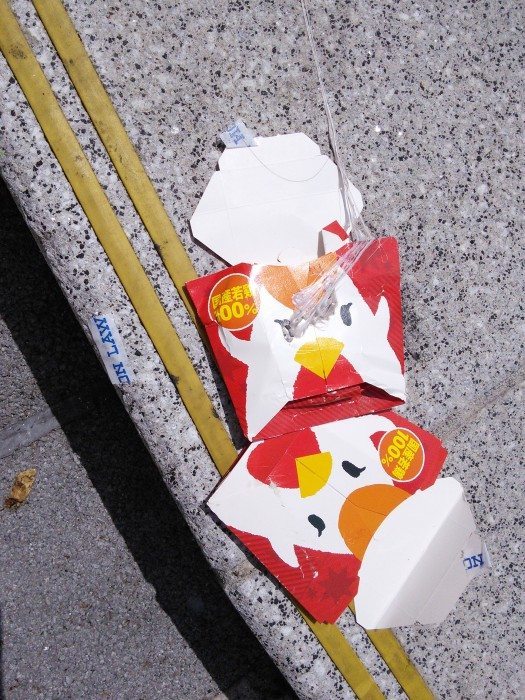 That’s only a part of trash that was in the park that day. I have found a huge amount of garbage everywhere in the park (in the bushes or inside the toilets).
I tried to measure how much trash is there exactly by gathering them inside garbage bags which can contain 70 litters of garbage. As I started to gather, two young men (22 years old and 24 years old) said to me, “Excuse-me” and proposed to help me gather the trash. Three of us gathered in total of 4 bags of 70 litters garbage bags that day. 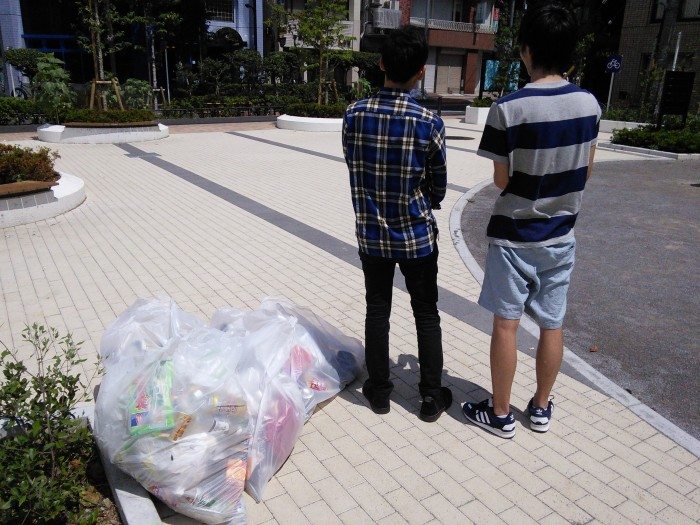 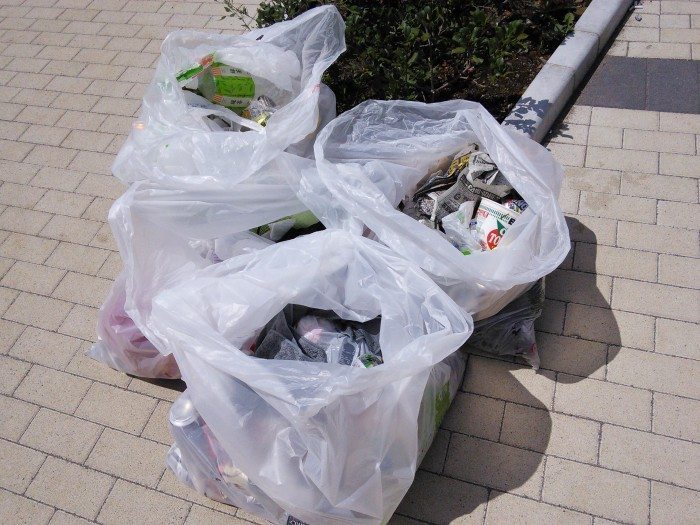 Two guys told me that they remembered very deeply what the president of the Committee said at the end of the Tokyo Rainbow Festival. So they wanted to help me with trash. Even so, it’s rare to find someone who volunteer gathering trash on Sunday morning. I was happy to see that there are still many kind people in the world.

The Shinjuku Ni-Chome Promotional Committee is dealing with garbage problems

I also interviewed the president, toshi, about how the Shinjuku Ni-Chome Promotional Committee is going to deal with these problems. 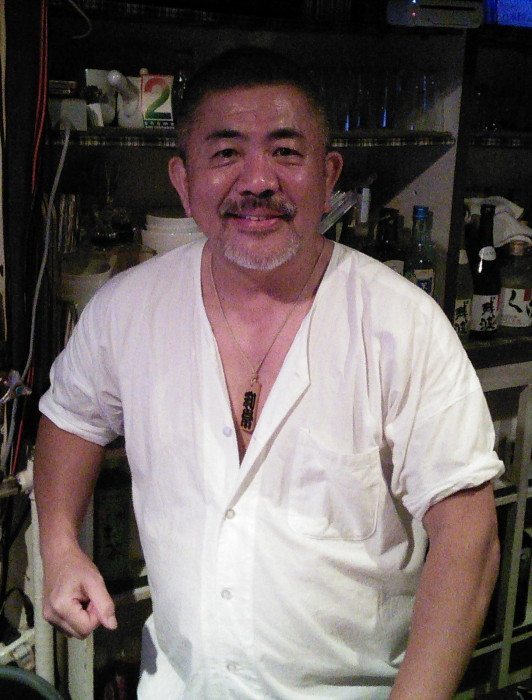 The president of the Shinjuku Ni-Chome Promotional Committee, toshi

“There are three things that the Committee is worried about the garbage problems.
1, The trash on the street thrown away by people who hang out here
2, The garbage which is taken out by bars and restaurants on holidays when no one collecting the garbage
It’s awful to see the street Naka-dori, which is not a place to take out the garbage, filled with garbage on Sunday morning. Because many people already leave the garbage there, there are even people who come with a car to leave the garbage there too. Some owners of gay bars have actually witnessed that.
3, The trash left on Saturday or on the night before holidays at the renewed Shinjuku park opened on April this year
The park is filled with trash after people eating and drinking. Concerning the park, there is also another problems of noises made by people drinking or practicing dances late at night, even though there are people living there.

Concerning those problems, I have talked with the president of the Shinjuku Ni-Chome neighbourhood association, the real estate agent of Ni-Chome, Futami, and few of the members of the Committee in order to find solutions to improve the situation.

The solution to the second problem of the garbage on the Naka-dori street, we have agreed that the first thing we can do is to put a sign that says “Do not leave the garbage here please.” We also thought about asking the private garbage collectors to come and pick up the garbage on Sunday and on holidays, but we didn’t have enough budget to make it happen. With the first problems of trash on the streets, we are still thinking about the solution.

We thought the third problem is the easiest one to deal with. The president of neighbourhood association and the Committee decided to register at “Park supporter,” which is a volunteer association for keeping parks clean in the city of Shinjuku. This association can provide us all the equipment for cleaning the park. When the shops closes on the Saturday night, that means around 5 o’clock in the Sunday morning, we are thinking of asking the owners to participate cleaning the trash in the park in near future. I believe that, if people see the owners of bars in Ni-Chome gathering trash, it would influence others to act more respectfully in the future.

In fact, the Committee has already try to clean up the garbage on the Naka-dori street on early Sunday morning. Sometimes only 4 or 5 people were there after they finished working. Some bar owners were too drunk and started to pick up young people drinking on the street. It wasn’t easy, but I was glad to do it. It’s very important that each owner keep in mind to protect the Ni-Chome area where he/she enjoy working. There are so many things we can do to improve here.
Although it takes time to deal with garbage problems, the Committee is handling it with strong determination.”

* All the pictures are taking by the contributor 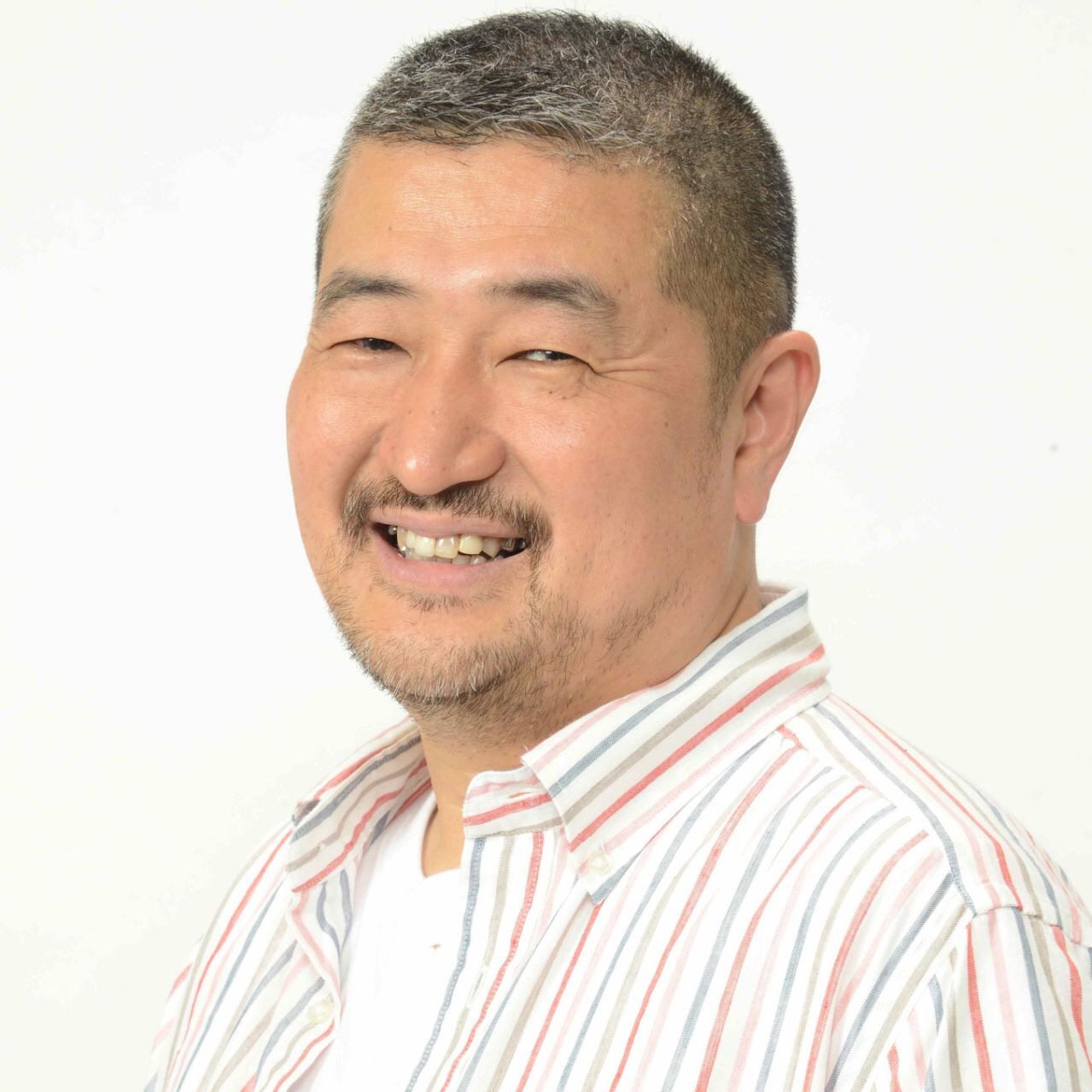